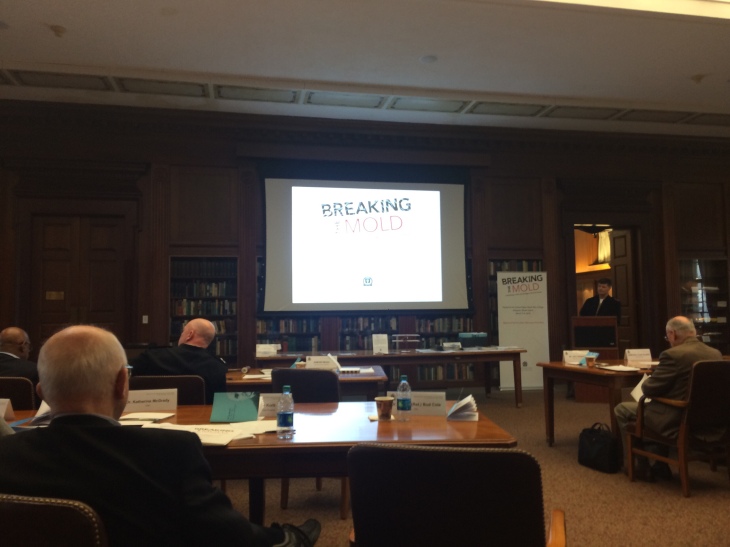 Sorry for my silence: tumult has been the order of the day around here. I managed to injure myself quasi-seriously during last week’s nor’easter, then plunged into the first week of the spring term and a “Breaking the Mold” Workshop in the historic Mahan Reading Room at the Naval War College.

it was a good week, believe it or not. A lot of goodness trumps a little bit of pain.

Big Navy sponsored the workshop as a catalyst for strategic innovation, and a stimulating event it was. Chatham House rules were in effect to foster freeform debate, but I’ll be putting out a barrage of posts with my takeaways here and expanding some to article length. First things first: what is “the mold” we as sea-service professionals need to break? Just before we closed out the Asia working group on archipelagic defense, our group moderator canvassed each person for a final statement. Rather than try to say something erudite about strategy, I posed that question.

To utter silence. Which was the point of asking. Hard to execute your mission without deciphering key words and phrases.

This is no slight. Workshop-goers offered countless innovative ideas over the two days of deliberations, These were all to the good. Nevertheless, they fell mostly into the realm of hardware, tactics, or budgetary combat, whereas the subtitle for the gathering was “War and Strategy in the 21st Century.” An unmanned airplane or submarine is not a strategy; these are implements of strategy. They are means, whereas strategy refers to ways for using means to fulfill national ends. Strategy harnesses power to realize purposes.

Which to my mind is the mold that needs to be shattered: a culture that’s increasingly out of sync with the strategic surroundings. Hardware, tactics, and programs lie downstream of culture. Obsessing over them gets priorities backwards. Revise naval and Beltway culture till they’re in tune with the times, and the other things will come naturally. We will devise methods and instruments to compete with good prospects of success.

You see where I’m going with this. Breaking a culture is a human—not material—challenge. It may mean realigning training and education, career patterns and incentives, recruitment practices, and much more. The naval service needs to reward traits and skills it needs to transform itself and discourage those that impede progress. But procedural tinkering may not be enough. The U.S. Navy reinvented its institutional culture for World War II—but only after the Imperial Japanese Navy broke the mold for it at Pearl Harbor.

And even then the cultural project demanded ruthless policies. Submariners unable to adjust to the new mission in the Pacific—raiding merchantmen—were summarily dumped from their commands if they failed to produce results after two patrols.

The hard truth, judging from SUBPAC’s experience, is that changing an institution’s culture sometimes means changing out personnel–and thus ending careers of those captive to old habits of thought. If the navy leadership stays true to its own history, breaking the mold and casting a new one promises to be a trying process with a heavy Machiavellian component.