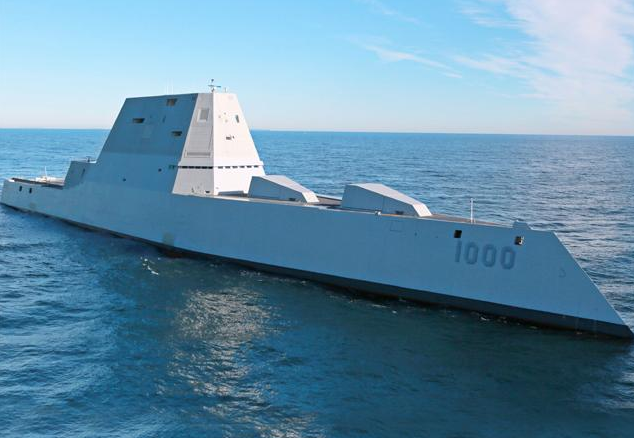 What if indeed? But in effect that’s what U.S. Navy fleet designers ordered done when they conceived of the DDG-1000 Zumwalt-class destroyers earlier this century. The Zumwalts are outfitted with an advanced gun system capable of lofting precision-guided projectiles far inland from the sea . . . but not assailing enemy men-of-war. (That leaves aside the fact that the gun rounds were so expensive the navy canceled them, even for land attack. Click here for that sad saga. A gun without ammunition is, well, dead weight.)

I remember being gobsmacked a few years back at learning how one-dimensional Zumwalt was. Why design a ship around a gun that’s not multipurpose? It defies common sense. The DDG-1000’s travails must be another hangover from the immediate post-Cold War years, when naval leaders told one another—and told all of us dissolute youths who knew no better—that naval history had ended (click here) with the Soviet Navy’s downfall.

With no one left to fight at sea, the leadership reasoned, there was little reason to go to the trouble and expense of equipping surface ships for major fleet engagements.

That brand of Year Zero thinking (click here) would have met with incredulity three-quarters of a century ago. During World War II battleships morphed readily into shore-bombardment platforms once it became clear that aircraft carriers were now the U.S. Navy’s heaviest hammer. Had battlewagons’ armament been designed solely for fleet-on-fleet combat, marines and soldiers would have gone without high-volume, all-weather fire support when assaulting Pacific atolls or Atlantic beaches. Naval gunfire was on hand precisely because naval weapons were multipurpose.

Now, thankfully, Defense News reports (click here) that the Trump administration has undergone a change of heart and requested a modest sum to convert the DDG-1000s to fight rival surface fleets—and fix that mistake. Zumwalts boast a humbler missile magazine than do Aegis cruisers or destroyers, but their missile silos could be stuffed with SM-6 interceptors repurposed for anti-ship missions, along with Tomahawk missiles capable of striking ships at sea. The Tomahawk was a multipurpose weapon at one time, but was reduced to—you guessed it—the single function of land attack back in the 1990s. Narrowing our portfolio was an industry unto itself once upon a time.

Combined with the Zumwalts’ stealth, such an arsenal could make a difference in open-ocean combat. One could see the DDG-1000 as a latter-day surface raider, sniping away at enemy formations on the high seas.

The lesson from Zumwalt? Keeping your portfolio diverse is a blessing in battle, when your world is apt to change around you—or, more accurately, when your foe changes it around you, as he has every incentive to do. Equipment should be as versatile as possible. The Swiss army knife should be fleet architects’ ideal—not some artisanal machine tool that does one job exceptionally well but can’t adapt easily to new functions.

From now on let’s take a workmanlike approach to building our naval armory.